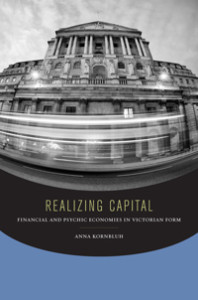 During a tumultuous period when financial speculation began rapidly to outpace industrial production and consumption, Victorian financial journalists commonly explained the instability of finance by criticizing its inherent artifice—drawing persistent attention to what they called “fictitious capital.” In a shift that naturalized this artifice, this critique of fictitious capital virtually disappeared by the 1860s, being replaced by notions of fickle investor psychology and mental equilibrium encapsulated in the fascinating metaphor of “psychic economy.”

In close rhetorical readings of financial journalism, political economy, and the works of Dickens, Eliot, and Trollope, Kornbluh examines the psychological framing of economics, one of the nineteenth century’s most enduring legacies, reminding us that the current dominant paradigm for understanding financial crisis has a history of its own. She shows how novels illuminate this displacement and ironize ideological metaphors linking psychology and economics, thus demonstrating literature’s unique facility for evaluating ideas in process. Inheritors of this novelistic project, Marx and Freud each advance a critique of psychic economy that refuses to naturalize capitalism.

Realizing Capital is not just about the psychic life of financial capital, about how the mad dance of the capital affects human psyche, and about how Victorian literature from Dickens onwards registered the psychic distortions imposed by the mad circulation of capital. The underlying premise is a much more radical one: the psychic life of capital, the way individuals experience and fictionalize financial circulation, is a key ingredient of economic reality itself, since the reality of the financial capital is itself structured like a fiction. Although Kornbluh’s book deals with Victorian England, it holds a mirror to our era – if you want to understand what goes on today, how a madness like the 2008 meltdown was possible, read Realizing Capital!

This highly original and far-reaching book puts Marx and Freud into an exciting new dialogue with the Victorian novel. Kornbluh reads these imposing thinkers as engaged in the same project as the realist novelists, all of them struggling to defamiliarize the frighteningly fictitious character of capital. Offering thrilling new insights into Great Expectations, Middlemarch, and The Way We Live Now, this book culminates in a tour de force reading of Marx’s Capital as a Bildungsroman and a radical rethinking of Freud’s ‘psychic economy.’

By tracing the cultural circulation of two specific tropes –– “fictitious capital” and “psychic economy” –– Kornbluh makes a compelling argument about the complex figurative ties that bind the realist novel to our understanding of both capitalism and the psyche. This exciting and original book will make us reconsider the novel’s cultural work as well as that of its criticism.